At the risk of becoming that guy who only blogs about the passing of celebrities – Lemmy, David, Glenn, Maurice – , I once again have to pay tribute to a fallen hero; Prince. Some artists are too important not to be honored.
Apparently 2016 is the year of the big goodbye – enough already!

For an entire generation of musicians and music lovers, Prince is/was invaluable. For me personally, no other celebrity influenced me more as a human being the way Prince Rogers Nelson did. In my personal top three even my favorite band Pearl Jam comes in second place and Kurt Cobain comes third. That’s saying something. 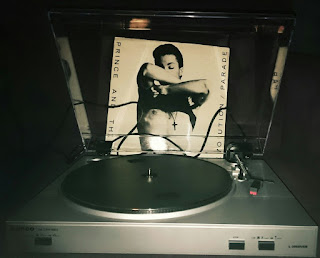 Speaking as a child of the seventies, I first discovered Prince as an almost-teenager during the 80s – to my parents’ annoyance, I guess you can call it a generation gap. While they played their favorite Dutch artists like Lee Towers and BZN (Band Without a Name) or  more famous artists like James Last and Abba until the cassette tapes broke, I fell for the little big man from Minneapolis whose groundbreaking music seemed to jump off the vinyl. The new and revolutionary music channel MTV, which actually showed music videos back then, showed his videos until they turned black and white.
In my mind, the three biggest names of the 80s were Michael Jackson, Madonna and Prince. Like Yfke said tonight, “If I were Madonna, I’d start taking my vitamins right about now.”*

I don’t have a lot of vinyl records, but Parade is still part of my collection. Other titles in my collection includes De La Soul’s 3 Feet High And Rising, a record with Dutch children stories and a Christmas record from my childhood., It’s an odd collection.
Sadly, I’ve never been to one of his concerts. Truth be told I was too afraid of ruining the image I had of him in my head.

The first-ever cd I bought was Controversy. Literally the first; the phenomenon of the compact disc was still pretty new. It was a raw, funky album that carried a political message (Ronnie, Talk to Russia), questioned his sexuality (Do Me, Baby) and controversially used bible texts. At that time I was an adult-to-be and less aware of these things; realization came later.

All I knew back then was that the music and certain lyrics really hit home. They spoke to an entire generation: who am I, how am I supposed to act, what should I believe in, who am I allowed to love? They created a platform for discussing sexuality, belief systems and gender identity. For me, this was a revelation and a source of support, even though I’m aware that the meaning you take from songs are often different from what the maker originally intended. The fact that Prince would later change his name to The Symbol, The Artist Formerly Known As Prince and then later on back to Prince, only added to the mystery of the artist.

His ideas regarding music sharing, his cautiousness in doing interviews and having his own recording studio in Minneapolis, it all added to the creation of a living legend. The rare times he acutally gave performances meant a guaranteed run on unaffordable tickets. For the lucky few that saw him perform, it must have been unforgettable.

The musical gems that came with movies like Purple Rain, Under The Cherry Moon and Sign O’ the Times are a beautiful musical legacy. Purple Rain made a deep impact on me because of the (dramatized) story behind the man and the connection I felt with it. Songs like Sometimes It Snows In April and When Doves Cry  I still can barely listen to them without shedding  tears. Darling Nikki is a-ma-zing, Diamonds and Pearls beautiful, the soundtrack of the Batman movie simply legendary (the one with Michael Keaton – you know, the real Batman)(after the best Batman, Adam West, of course).

The influence his music and lyrics had is tremendous: musicians like Wendy & Lisa, Sinéad O’Connor, Vanity 6 (Denise Matthews of Vanity 6 died earlier this year on 15 February), Sheena Easton, The Time, The New Power Generation and The Revolution became stars thanks to him. Some of them stayed great on their own.

It’s probably obvious that most of my memories stem from a distant past. Musically speaking he and I had parted ways, but his significance to me has never changed.

A man with many faces and many talents, leaving a gaping hole in the music industry. A musical genius – someone I never knew but owe so, so much to.

All good things, they say, never last
And love, it isn’t love until it’s past

*It was actually my friend Scott who said it, but Alex wasn’t listening ~ Yfke